In my ebook on Retirement Income Analysis know, I suggest that retirees consider investment in two main types of vehicles: Treasury Inflation Protected Securities (TIPS) and a World Bond/Stock fund (WBS). This post shows the performance of a proxy for the latter in the turbulent quarter when the COVID-19 pandemic first took its toll on almost every aspect of peoples' lives, including asset values.

As in previous blogs in this series, I will use two Vanguard ETFs (exchange traded funds) to represent investment in world stocks and bonds: VT (their world stock ETF) and BNDW (their world bond ETF). Their cumulative returns with dividends reinvested over the quarter are shown in the diagram below (using data from Yahoo Finance). Also shown is WBS, a portfolio that includes shares of the two ETFs in proportions intended to represent the relative values of bonds and stocks in the world (details of the construction of the latter are given later in this post). Note: this portfolio is not to be confused with Webster Financial Services, whose stock has the ticker symbol WBS. 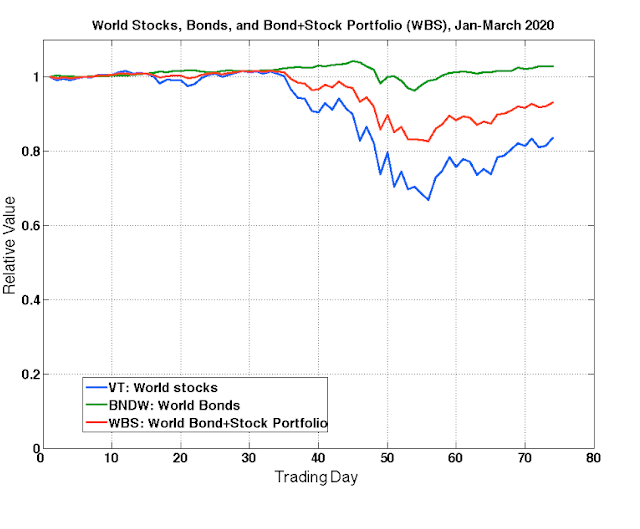 As is well known, there was a disastrous fall in the values of stocks around the world in this period, with a subsequent rise that gave back roughly half of the losses. On the other hand, bond prices fell only modestly, then ended the quarter slightly higher than they started. Not surprisingly, the world bond and stock fund experienced smaller changes in value than stocks but larger ones than bonds. Here are some key statistics:

Clearly, this period was characterized by a disastrous fall in the values of stocks around the world. At the low point, the world stock ETF (with dividends reinvested) had lost almost one-third of its value. Fortunately equity prices recovered some of this loss, ending with a value slightly over 16% lower than it had been at the beginning of the quarter. In contrast, the world bond ETF lost less than 4% during the quarter, and ended with a gain of almost 3%. Finally, our portfolio of world bonds and stocks suffered a smaller maximum loss (roughly 17%) and ended down slightly less than 7%.

Now to the construction of the world bond and stock fund (WBS) used for the calculations above. The formula was very simple: the fund consisted of one share of the world stock fund (VT) and 1.01 shares of the world bond fund (BNDW), with dividends paid by each fund during the quarter re-invested in that fund when received. All ETF values were taken from the Yahoo Finance site.

But why did I use a portfolio with 1.0 shares of VT and 1.01 shares of BNDW? Because that would have provided relative values of world bond and stocks consistent with the proportions for the end of November given on the FTSE Asset Allocation Policy Calculator site (for more, see the November 2019 post in this blog).

Here is the formula:

Prices for the two ETFs at the end of November could have been obtained shortly after the markets closed. But k (the proportion of the value of stocks in the world bond and stock fund) at the end of a month is not available at the FTSE site until some day in the first half of the following month. Therefore the value of x at the end of a month cannot be calculated until the first half of the following month. The calculations in this post assumed a buy-and-hold strategy throughout the first quarter of 2020 with 1.01 times as many shares in BNDW as in VT.

Here are calculations using values from the ends of the months prior to and during the first quarter of 2020.

The extent to which a fixed ratio of share holdings of the two funds could represent the overall market of world stocks and bonds is, of course due to relative amounts of redemptions, new issues and payouts of the two types of investments. Concerning the latter, according to Yahoo Finance on April 17, 2020, the yields of the two ETFs were quite similar, with the yield of BNDW equal to 3.01% per year and that of VT at 2.90% per year. But until there is a single mutual fund or ETF designed to represent world values of both bonds and stocks it makes sense to at least make calculations such as those in the table above and to adjust the relative number of shares of the ETFs used to represent world bonds and stocks when prudent.

at April 19, 2020
Email ThisBlogThis!Share to TwitterShare to FacebookShare to Pinterest