at March 25, 2021 No comments:
Email ThisBlogThis!Share to TwitterShare to FacebookShare to Pinterest

And now for something completely different.

This slidecast covers some of the key statistics that are being widely used to measure and try to control the pandemic in 2020 caused by the covid-19 virus.

at October 10, 2020 No comments:
Email ThisBlogThis!Share to TwitterShare to FacebookShare to Pinterest

As the previous post indicated, henceforth some of my posts will provide links to documents in the .pdf format in lieu of including the covered material in a post. But some posts will provide instead links to slidecasts that I have created using the scratch programming language developed at M.I.T..

The programs that I have written for this purpose are compatible with many computer browsers. They can also be used on some other devices such as cell phones, tablets, etc.. With computer browsers, it is possible to choose to have the narration in English, French or Spanish. However, for devices without keyboards, only English is available.

The terms offered by insurance companies and others who provide annuities change from time to time. In recent years there has been a substantial decrease in the amount of future income that can be purchased for a given current payment. This slidecast shows some of the changes in annuity terms and the driving force behind them. To access it, click on this link:

at September 30, 2020 No comments:
Email ThisBlogThis!Share to TwitterShare to FacebookShare to Pinterest

To make it easier for me to create posts for this blog, and to provide each one in a format that can, if desired, easily be read and saved on your local computer, I have chosen to use the pdf format beginning with this post. You should be able to view this post and those to follow in your browser, and save any such pdf file if you choose to do so.
at August 08, 2020 No comments:
Email ThisBlogThis!Share to TwitterShare to FacebookShare to Pinterest

Treasury Inflation-Protected Securities (TIPS) in the first half of 2020

In the book on Retirement Income Analysis, I argue that for an investor who purchases goods and services with U.S. Dollars, the only riskless securities are Treasury Inflation Protected Securities (TIPS) issued by the U.S. Government. These bonds make coupon payments semi-annually that are adjusted to take into account the most recent Consumer Price Index (CPI) for goods and services in the United States. At such a bond's maturity date, an amount is paid that is also adjusted to take into account the CPI at the time. There is one additional feature: if at the maturity of a TIPS issue the CPI is lower than it was at the time the bond was issued, the original par value is paid rather than a smaller amount. With this one highly unlikely exception, the coupon payments and principal payment from a TIPS bond can be considered riskless in real terms.

At any given time there are TIPS outstanding with different times to maturity. For each one, a real yield to maturity can be calculated based on its current market price and future guaranteed coupon and principal payments. At its web site for Daily Treasury Real Yield Curve Rates, the U.S. Treasury provides yields to maturity for five different maturities (5, 7, 10, 20 and 30, years). Here is a link: 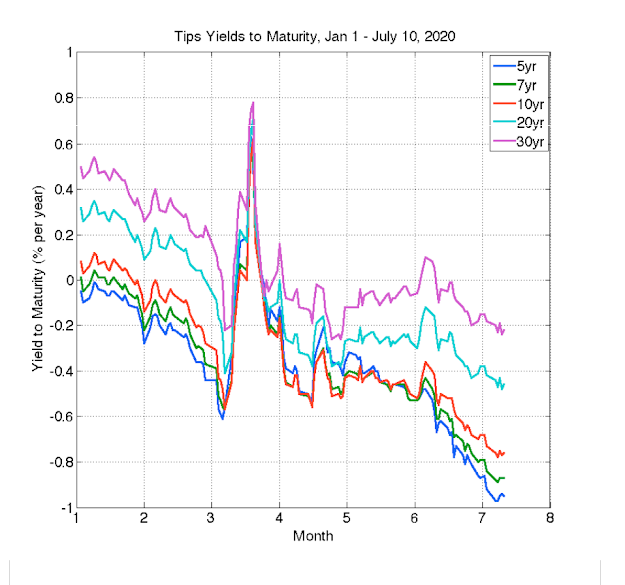 Throughout this period, longer maturity bonds provided higher yields to maturity than those with shorter maturities. In bond jargon: the real yield curve was upward-sloping. That said, there were days when the differences among yields with different maturities was very small indeed, but at other times they differed significantly. In most months there was a downward trend in yields at each maturity. But there was one major exception: in the middle of March, yields changed from negative values to positive values, reflecting significant declines in the prices of the underlying bonds. The reason is not hard to guess. The gravity of the Covid-19 pandemic was becoming apparent at the time and prices of securities of many types fell dramatically. TIPS were no exception. However, the panic did not last very long. By the early part of April, TIPS prices were near their values a month earlier and thus yields to maturity were back to previous levels. Thereafter, as the second quarter progressed, yields continued to fall, reflecting rising prices for the securities.

But there is more drama here. At the beginning of the year, TIPS with shorter maturities provided almost no real yield, but those with longer maturities provided at least some increases in purchasing power. Later, yields fell and turned to negative values. In early July the yield to maturity on 5-year TIPS was close to -1% per year and those of every maturity were priced to provide negative real yields to maturity. Thus for any time period up 30 years, an investor in TIPS could plan on receiving less purchasing power than he or she invested.

While the yields to maturity tell the story of long-term returns from TIPS, it is useful to do some additional calculations to obtain estimates of “forward yields”. Consider two TIPS – one maturing in five years, the other in seven years. Think of the latter as composed of two investments: the first requires investment today and pays off in five years. The second requires a “forward” commitment today to invest a dollar in five years and will then pay off two years later in year seven. Assuming no coupon payments and using subscripts to denote the initial year and the final year for an investment we can write the relationship among two standard yields to maturity and a forward yield to maturity as:

The first and last expressions use the types of yields-to-maturity that are provided on the Treasury website and plotted in our diagram – these are sometimes called spot rates. The second term includes a forward rate for a commitment made today to invest in year 5 to obtain a payment in year 7. Obviously it is a simple matter to compute the forward rate, given the two spot rates. The following diagram shows the results of such calculations for each of the combinations of adjacent spot rates in the previous diagram. For completeness, the spot rates for years 0 through 5 are also shown. 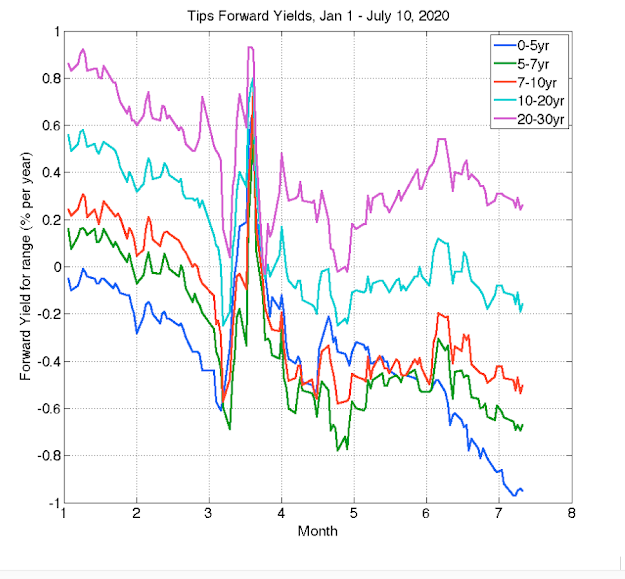 If each TIPS paid only at maturity, it would be possible to actually achieve the forward rate for an interval. For example, one could invest in a 7-year TIPS with the proceeds from selling short a 5-year TIPS. This would require a known future payment in 5 years for the short position and provide a known future receipt in 7 years for the long position. The net result would earn the the forward rate for years 5 to 7. Unfortunately, the actual world is not that simple since actual TIPS provide coupon payments every six months. It is true that from time to time an institutional investor or broker will purchase a TIPS and sell one claim for its coupon payments and another for its principal payment at maturity (a “stripped TIPS”) which will be equivalent to a zero-coupon TIPS. But such exotica are generally not available for individual investors. The bottom line is that the forward TIPS yields can best be interpreted as indicators rather than explicitly achievable investments.

To see how derived forward rates can be useful, consider the 7-year TIPS on July 10, the last year in our example. The yield to maturity was -0.87% per year. It would be natural to think of the security as providing -0.87% per year for seven years. But wait. The yield on a 5-year TIPS at the time was -0.95% and the forward rate for years 5 through 7 was -0.67%. It might be more useful to think of the 7-year TIPS as providing -0.95% on average for five years, then -0.67% on average for another two years. Of course, if we had used data for TIPS with maturities in years 1, 2, 3, 4, 5, 6 and 7 we could have broken the overall yield into even more pieces. Those interested in making such detailed calculations can find current TIPS quotes at https://www.barrons.com/market-data/bonds/tips.

But why calculate forward rates at all? One answer is that they might be useful predictors of future spot rates. But not perfectly so since the forward rate for a future interval of time may reflect both a forecast of spot rates at that time and a premium for taking the risk of making a commitment to invest at a future date. Thus a forward rate might be greater than predictions of the associated future spot rates. If so, these data suggest that on July 10 2020, TIPS yields suggested that investors expected negative relatively riskless real rewards for deferring consumption for decades into the future.

To provide some perspective, here is a longer record of yields to maturity on 10-year TIPS, from the Federal Reserve Bank of St. Louis FRED site (https://fred.stlouisfed.org/series/WFII10):

As can be seen, 10-year TIPS yields have been negative before (mainly in 2012) but turned positive thereafter until 2020. We can only hope that this might happen again.

In any event given current TIPS rates, retirees need more savings than before to achieve any given future standard of living with certainty. Some will respond to this fact by saving more and/or spending less today. Others may decide that saving is less attractive and spend more than previously intended. Moreover, the latter tendency may be encouraged as well by the pandemic (“eat, drink and be merry, for tomorrow you die”). One might argue that relatively few investors are following this advice since if more did, TIPS prices would be lower and thus yields to maturity higher. But here, as always, it is important to remember that prices in security markets are influenced disproportionately by the rich.

One thing is certain: current TIPS yields are far lower than in most earlier times. All the examples in my ebook on Retirement Income Analysis used computations that assumed a riskless real rate of return of 1% for all maturities with a return premium for bearing the risk of a world bond/stock portfolio. Of course the accompanying RISMAT software makes it easy for the user to change either or both of these numbers since they are simply properties of a market object.

But in a world of low or negative riskless real rates of return, some retirees may conclude that if they survive COVID, they might well run out of money thereafter.

Other than that, have a nice day!